Have you ever wondered what Stanley's life was like when he was happy?

No, of course not, that's a ridiculous question. But after the critical and commercial success of The Stanley Parable: Ultra Deluxe fans were left wondering what was next? Surely they couldn't keep releasing the same game over and over again with a different coat of paint each time could they? No, the future of Stanley had to be something fresh, something just as daring and ground breaking as the original Stanley Parable was back in 2013. But where could things possibly go? With the new content added to The Stanley Parable: Ultra Deluxe all the burning questions that the original 2013 release had left fans with had been answered, all the loose ends tied up, finally bringing a satisfying and definitive conclusion to The Stanley Parable.

But of course, the answer was so obvious. The only way to go forwards was to go backwards. And so, it is with much pleasure that I present to you: The Stanley Prequel! The Stanley Prequelble? Hmm... Maybe something flashier like The Stanley Parable: Origins! Well, we can figure out the name later, what's important is that The Stanley Prequel finally gives fans a chance to know what it's really like to be Stanley. Both the original Stanley Parable and The Stanley Parable: Ultra Deluxe start their stories at an extremely difficult time for Stanley, having just had his quiet peaceful life shattered as he faces the greatest uncertainty he's ever known. And although Stanley's life up to this point is portrayed as dull, lacking in any meaningful choices, and not fit to be a video game, this is an integral part of understanding Stanley as a character. For after all, how can we really know Stanley when we've ever only known him in a time of great distress? Without knowing what exactly it is that makes him happy?

And thus, The Stanley Prequel was born. Now it's very important to mention that while this is a prequel, much of the foreshadowing and character developments presented here can't be fully grasped without having at least played the original 2013 Stanley Parable or the new and updated Ultra Deluxe edition. For this reason it is recommended that you first purchase and play through The Stanley Parable: Ultra Deluxe (out now on Steam, Nintendo Switch, PS4, PS5, Xbox One and Xbox Series X|S) so that you can fully appreciate all the subtle nuances of The Stanley Prequel.

This Game is harder than Dark souls.

this was delightfully fun! I couldn't ever see how others consider this soul rending, personally, I relished every moment that the orders came in! It's like I was made exactly for this job!

(no, but seriously. it is actually delightful)

I had a couple of other people mention the same thing, so I'll just post about it here for clarity's sake. The left/right bracket keys refer to the [] characters. Some people think it's talking about () or <> but none of the inputs require using shift, which those characters would. I could try to have it parse additional characters that require using shift, but that would be more effort than I'm willing to put into this.

I have been playing this game for 50 minutes now. Who knew pressing seemingly random buttons on a keyboard would make me so happy. This game makes me enjoy the world slightly more than I do already. You are a genius and deserve more recognition. I appreciate you for making this.

You sir, are an absolute genius. An absolute mastermind far ahead of your time. This isn't a game we needed or deserved, but you took time out of your day to make this genius prequel, and for that, I truly thank you. As someone who played both the original Stanley Parable and the Ultra Deluxe remaster, this game really hit me right in the feels. I now know what it was like to be Stanley, and how much dumb fun his job was. Pushing random buttons as they appeared on the screen was a lot of fun. Stanley and the Narrator were onto something here. Not only that, but you made it look nearly identical to how it does in the opening cutscene of the game. That alone is not an easy task. I expected something like a short narrative where you play as Stanley as he begins his career working at this... uhm, work place we don't know the name of. I didn't expect a game where you actually do the job that Stanley did before his whole world crumbled when all of his co-workers disappeared. This game makes me feel like Stanley before the events of the game happened. I was able to finally experience the feeling Stanley felt and the delight that his job brought to him each and every day. Pushing every button that appeared on the screen was not boring. It was actually a lot of dumb fun and I really felt myself getting immersed. Pushing each button as each prompt appeared on the screen felt like I really was Stanley. Each time I pressed a button after a prompt appeared made me feel, well, happy. Just like Stanley did. There is nothing more comforting than being right there in the moment, feeling the exact same happiness as someone else did. This game truly delivers a powerful message. A message that needs to be heard by everyone: enjoy life while you can, because at any moment in time, your whole world can crumble upon you without notice. The message is super powerful. I actually felt very safe while I was playing this. This feels more than just a simple game made in Unity. This feels so much more than that. It feels like you're actually there, in the same building, in the same cubicle, doing the job that the protagonist was doing in the story. Each time I pressed a button I felt like I was truly there in the same "427" office cubicle, doing the same job Stanley did. This game is a masterful vision you have brought onto the world. The entire game was aesthetically appropriate to the tone of The Stanley Parable, and it completely shattered my expectations straight into the stratosphere. You are truly a genius for making this. Now everyone can know what it is like to be Stanley. Definite 10 out of 10 from me! Amazing work and I wish you nothing but the best of luck on any future projects you have planned. You were truly onto something with this. You're just an absolute genius! You should also provide a download for this so we can play it offline. I would love to play this if, say, I don't have internet. Thanks again, and I hope your career continues to succeed!

Reply
StrangerCast102 days ago(+5)
This was NOT a game: this was a TOUR DE FORCE. My hands were shaking the whole time and I vomited in ecstatic mania after I finished recording video. THANK YOU for revealing your masterful vision to the world, o gracious genius!

More seriously, this game was everything it was cracked up to be. The graphics were both aesthetically appropriate and competently made. The gameplay, though lacking, met expectations for what the game is. It was a nice little meme game. Nice work and best of luck in your future endeavors.

this was just supposed to be an elaborate joke, but damn not gonna lie pushing buttons kinda fun, stanley was onto something here. 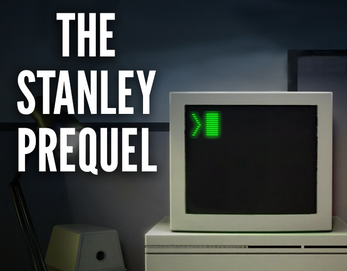