A downloadable game for Windows

This is a potato dating sim. A potating sim if you would.

Mater is a young potato who would often spend his days sitting the dirt and vegetating. His days were peaceful until one day while doing absolutely nothing at all he and several of his other potato friends were captured by the treacherous humans. Not giving up without a fight, Mater lead a resistance against the humans in order to free himself and his fellow potatoes.

For a time it looked like they could win, as Mater and his comrades fought off wave after wave of humans, but alas the humans were too clever. Under the pretence of a peace treaty between potatoes and humans, the humans lured Mater and his band of rebels to their lair. As soon as they set foot into the human kitchen Mater and the other potatoes were quickly captured and held prisoner in the most dastardly of prisons: a burlap sack.

Many of the other potatoes gave up and silently waited for their demise at the hands of the humans, but not Mater. Mater spent his time in the burlap sack thinking, tackling the question of how they could possibly escape. Then one day he realised that the burlap sack they were being held in was not in fact impenetrable. At the far side of the sack was a small, seemingly insignificant hole, and this Mater realised, would be the key to their escape.

Mater quickly began tearing at the hole, but he soon realised that his strength alone would be enough. He sought to enlist the help of the other potatoes, telling them of his idea, but no one would listen to him. All the other potatoes had accepted their fate, many of them even despised mater for leading them into this trap. Everyone had turned their backs on him. Everyone but Potricia.

Of Mater's band of rebels, Potricia was the smallest and most frail, often leaving the fighting to the other larger potatoes, but she was full of spirit. When Mater went looking for help she was the first, and at the time, only one to volunteer. Together the two of them began working on the hole in the burlap sack. Eventually the other potatoes began to realise that perhaps Mater's idea did have some merit to it after all. Revitalised by Potricias burning spirit and led under Mater's courageous direction, the potatoes worked together to get the hole to a point where it was large enough that they could begin to squeeze through it.

One by Mater directed the potatoes out of the bag, refusing to leave until he saw that the others were safe first. Potricia stood by his side the entire time, not wanting to abandon Mater or any of her other fellow potatoes. But alas, tragedy struck once again. Just before the last of the potatoes were out of the bag the humans returned. Infuriated by what had happened they grabbed the remaining potatoes and took them off to their boiling pots.

And here we are now. Mater and Potricia sit idly by the boiling pot, waiting for their time to come. With no other distractions as they sat at deaths door, Mater couldn't help but notice how beautiful Potricia was. Perhaps he was always preoccupied worrying about his fellow potatoes, leading the rebellion and latter securing an escape for his fellows. But now, there was no one else left. It was just him and Potricia. If only he had perhaps spent more time admiring her, spent more time listening to words and staring into her sparkling blue eyes... In a few minutes they would both be dead. Mashed up and served as a side dish. But, perhaps it wasn't too late? Although it wouldn't enough to make up for the lifetime that he would never spend with her, Mater vowed that for these last few moments he would give Potricia his full attention, and that he would help her with anything that he could...

This is where our story begins.

Made by these hot potatoes:

It All Boils Down To This Windows Build.zip 14 MB

I actually loved this game so much, it was so cute, it almost seemed repetitive, but it kept my interest to keep playing for quite some time. I would LOVE to know what the words in Latin are because I am not the translator for it, but other than that it's a super cute game and I had a great time playing it! Great work! <3

Hey! Thanks for playing. All the Latin in the game is actually Lorem Ipsum, a type of dummy text used as placeholder for testing typesetting. It doesn't actually translate to anything meaningful in most cases :p 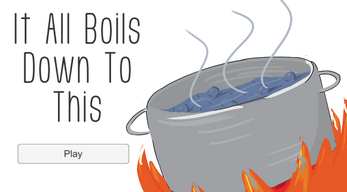 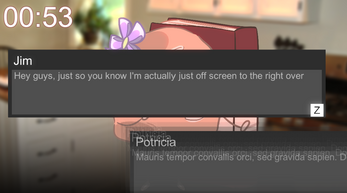 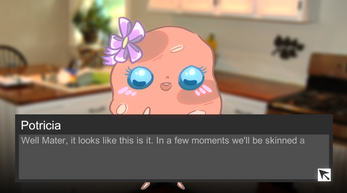