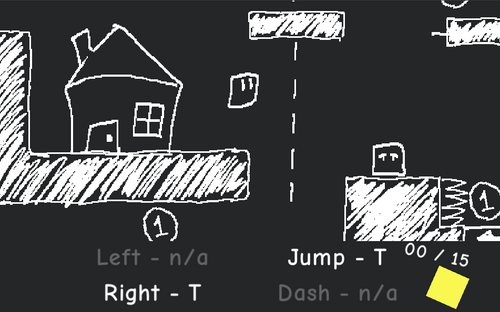 House is a game I made in ~48 hours for the 2019 GMTK (Game Makers Toolkit) Game Jam. The theme of the jam was "Only One" and so I made a platformer where you have the full list of abilities and inputs, but only have one button to bind them to.

In the GMTK Jam theme reveal video, one of the prompts of inspiration was to take something that players are used to having lots of and giving them only one. I started out thinking about making a game where the player would choose a button to use, and then only have access to that button. This eventually evolved into having a single button, but being able to change what that button does to allow you to do different things.

While I settled on a platformer, I feel like I didn't really give any other ideas a chance. I had been working on a platformer template that I figured I could use for game jams like this, so my mind was kind of already set. While it worked out for the scope of the jam, I think it would have been interesting to take a more mechanically complex game and see how it would work with the same idea. Something like a RTS or an MMO where you have lots of different inputs that your using all at once.

Knowing that players were only going to use one key, I wanted to try and emphasize that, and make it more meaningful than just having it be an arbitrary key. Letting players choose which key they would use was one step in this direction, but I also wanted it to tie into the narrative of the game. The idea was that you would play as a key that had been removed from it's keyboard and was trying to get home, and along the way you would meet other lost keys that had been abandoned or forgotten. Unfortunately implementing the dialogue system was problematic to say the least, and I ended up cutting it entirely.

One of my biggest concerns while making the game was how it's unorthodox method of movement would impact things. Early on I figured that the game would have to be much slower than a normal platformer in order for players to be able to swap inputs while they played. It would be more like a puzzle than a platformer, where you're trying to figure out how to get through each area with your one key.

But I was having trouble figuring out what exactly these "puzzles" would be. In my mind, a lot of the games interest would come from having to swap between conflicting actions, for example, going left and right at the same time cancel each other out and you end up going nowhere. What I didn't realize until later though is that left and right were the only actions you really needed to toggle on and off. Jumping worked in tandem with both of them, and beyond that there isn't really anything else mechanically inherent to platformers. I tried to get more variety by adding a dash to go along with your jump. A dash jump would go farther than a normal jump, but not as high, and a dash on it's own could be used to navigate areas with low ceilings.

The dash certainly helped add some variety to the players movement, but I still wasn't sure how to make puzzles around the players abilities. Most of the levels and challenges I had come up with by this point were based around alternating between moving left and right, and while there were some new options with the dash, the direction you were moving was still the most important thing.

As the jam continued I began to worry about the levels and challenges I had designed thus far. None of them really felt like puzzles, and more than that I became more and more worried that the game would just feel tedious, as though the gimmick of toggling between inputs on a single key was just an abstraction of the controls on an otherwise boring platformer.

I took a break from working on things for a bit and decided to play the original Super Mario Bros, partly for inspiration and partly cause I was sick of looking at my game. Let this be a lesson to taking breaks and looking at other games for ideas, cause it really works. Somewhere around World 1-2 I realized that what I needed were other ways for the player to run, jump, and otherwise move throughout the level. Things like moving platforms, springs, conveyor belts and other objects that would move the player around without they themselves actually moving.

From here everything else clicked into place. Up until this point I had let players change the actions bound to their key whenever they wanted. But I realized that by limiting the player's ability to change their key bindings to only certain points in the level would let me make puzzles that could only be solved with a "correct" set of key bindings.

But I was running out of time. Conveyor belts and moving platforms were simple (though ultimately flawed), the springs gave me no end of trouble, and I kept running into problems with opening and closing the key binding menu. This was on top of now actually having to design challenges that worked with the new setup. Being only a single person, In order to actually finish in time I scrapped the idea of restricting the players ability to change their inputs and made a single level that was more of an open playground, showing off the springs and other things I had made, than a series of challenges.

And that's how I ended up with House. The title House is referring to the house sprite I made back when I was planning to have the narrative about a lost key, as it and the other character sprites where the only other things in the game. I tried to tie it all together by having the level come to a point at the top so that when zoomed out the whole thing kind of looks like a house.